I cannot say enough good things about this Day 25 article. Read it and than go thank your DM/GM. The last player that thanked me was one I mentored as DM/GM. She has her own group now and told how much she appreciated all the extra work she now realizes goes into running a great session. You want to really thank your DM/GM…… bring them cookies!!

There are so many ways to thank your GM.

For most Dungeon Masters, the creation of a world is the pinnacle of our imagination coming to life.  Stories yet to be told and adventures that are all waiting for players to jump in and explore the complex plots you have spent untold hours preparing maps and notes for.

You’ve spent every bit of spare time bringing your inner creative genius to the table.  You set the stage for your heroic patrons to finally have a seat at the table and part take in your final design.

Here is where a lot Dungeon Master make their first mistake.  There is nothing wrong with the world you have spent your valuable time creating.  The political backgrounds and intricate NPC’s you have dreamt of, or the vast unexplored temples and long forgotten ruins they have yet to be explored are not a problem. It’s your players that become an issue.

Not all players are going to enjoy your newly created mega world.

As you can imagine, every player is unique and each one of them needs something very different from the person sitting beside them.   Their dream character they also spent time crafting may not match your new campaign world.  Your world ends before it really gets started.

To resolve the great disappointment you might face I can offer couple of quick tips.

Before you start penning your ideas, sit with your players.  You can do this either as a group or one on one.  I suggest a little of both.  Communicating one on one with each player is my preferred method before bring them together as group.  This way each players can express without influence their own thoughts and ideas.

This session zero idea lets players tell you what they like and don’t like.  Some like horror adventures fill with villains from the underworld while some may like cities to explore.  Perhaps one of your players secretly loves roaming the high seas as his swashbuckling rogue swings from mast to mast battling pirates and sea monsters.

Getting player feedback is one of the most important resources a good dungeon master has.   Finding out what they like and dislike helps you prepare a world filled with player stories.   Make notes and do your best to remember to appeal to each of them.  You are just a facilitator and players are the real story.

Once you have collected all this information from your players you are now ready to begin creating.

You have sat with your players and gotten some valuable feedback.  It’s time to get started on the world you wish to design. It becomes a jigsaw puzzle of different lands and cites mixed in with numerous places to explore and become lost in.   Mystical ruins and coastal cites spring up over a large map.   You have placed dwarf strong holds and Elven tree towns next to the lands of orc and goblin warlords.  Skeleton pirates roam the seas and high kings do what they can to keep the peace while political infighting threatens the very fabric of each kingdom.  Your map begins to become its own monster.

This was also my first mistake.  Where do the players start?  After a year of gaming once a week the players never really stepped out of the area they had started in.  I was left with 80% of a binder full of notes that will never be used.  All the wasted time could have been spent polishing the areas that the players actually started in.

Don’t scratch out that large map you made but at the same time start small.  Polish the starting area.  I mean really polish it.  Add in those important and reoccurring NPC’s and detail the area.   If you leave the rest of the areas mostly open you have areas to adjust to suit the players, and mold it into what they need.

Those character they spent time creating are the stars of the show.

Review those notes from your players and study what they have enjoyed often.  Make a world that will last so the stories told will last decades. 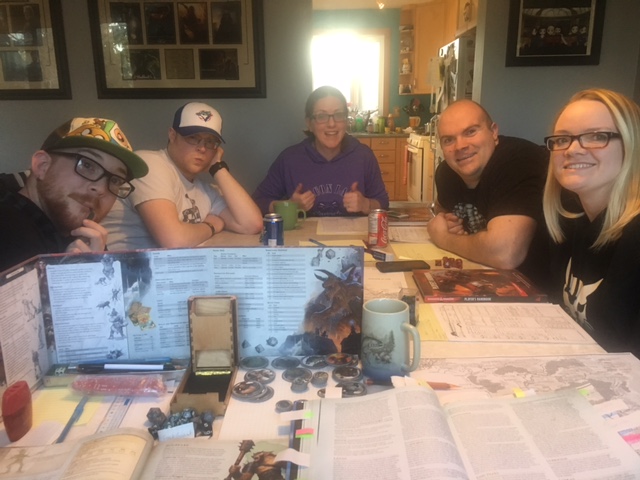 Happy players are your best reward.  Forget that +1 sword, give them what they truly want.

Please take some time out of your busy day and support this.

I have a very exciting announcement to make!

Loved this. When creating that amazing background for your new character keep this in mind.

In the years that I’ve spent roleplaying, I have found myself more than once struggling with the character creation process. More than anything I think it’s because the more I play, the more I find that characters will indeed make or break the game.

We have all been through it, we have some new and exciting game to play but we dread having to sit down and write down something interesting for our leads. We scratch our heads thinking that our ideas are just “not cool enough” or just simply amazed at discovering what a blank mind really was. What I want to do here is simply to tackle a method that is fairly easy to employ and that can help you make a richer and more interesting character, and has the added benefit of being quick, easy and painless.

Excellent ideas for experience points and methods for the Dungeon Master.

For the month of August we are presented with an alternative experience system.